Posted on August 23, 2011 by John in Exposing the methods 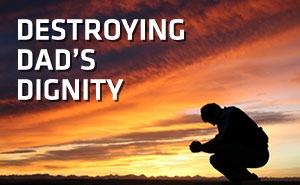 Thousands of fathers across America right now are viewed by their children in a disdainful, disrespecting way, brought about by badmouthing and brainwashing.

Even a father who is in jail and has done horrible things does not deserve a verbal attack. Adults can comment all they want on him, but when it comes to the kids, children should never have to encounter an adult who destroys their father’s dignity, even if that father is in jail.

The importance of a father and a mother to children is unrivaled. As such, no ex-wife, mother-in-law, or anybody else should trash the father in front of that father’s own children. Yet that’s what’s happening across America every day. Divorce and children born out of wedlock have caused many mothers to take out their hurt and anger on the “flawed” father by directly enrolling the children in their contempt and hatred.

The direct route for these bad parents to ease their hurt is to destroy Dad’s dignity. It ranges from saying how Daddy never loved Mommy, and doesn’t love the child either, to falsely accusing him of rape, physical abuse, or molestation. The most common way of lessening Daddy’s worth is by addressing him by his first name, and teaching the child to do the same. So Daddy becomes identified by his first name, “David.” Teaching a child to stop calling his Dad, “Dad,” is destructive beyond measure.

The goal is to impugn Dad’s worth as a father and as a human being. If the child is young enough, a parent can successfully diminish in the child’s eyes his or her own Daddy.

Any attempt to destroy a child’s connection to a parent should be punishable by law. But because it’s hard to prove, this kind of child abuse is enacted on children everywhere with virtually zero consequences for the abusive parent.

Destroying Dad’s dignity— or manufacturing a lie to a child that their father is not worthy of their love and affection– happens far too often. The best action for fathers at the receiving end of this is to stay the course. Stay in your child’s life. Keep the phone calls, emails, and texts coming. Document, document, and document again the abuse, and contact a lawyer if you have evidence of your ex mentally abusing your child.