You are here: Home > Brainwashing grandmothers 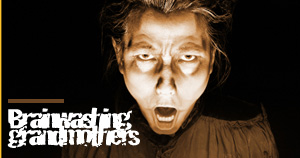 Over the years I’ve heard my son’s grandmother enough times to see first-hand how she’s hurting my son’s relationship with me. And I realize that what I’m hearing is only the tip of the iceberg, sadly.

Just a few weeks ago, during a long vacation, grandma tells my son halfway through (paraphrasing),

“You’re on the downhill slide!“

Translation: The sadness of having to spend time with the other, “lesser” parent- your father- is getting close to ending! Then you’ll be back with us and away from the monster…

Another thing she said that showed how selfish she was during one summer saying to him on the telephone how many hours until she sees him again (I can’t remember the exact number, but it was in the hundreds). And for about 5 minutes prior to that, she asked him nothing about what he was doing (we were out of the state on a trip to the lake). She went on about all the things he was missing back home! Learning absolutely nothing about her grandson’s exciting trip to a large lake…

In many families, the grandmother is the dominant figure in the entire family tree. Which is perfectly fine. But when the grandmother uses her power to aid (or in my situation, lead) the effort to sabotage her grandson or granddaughter’s relationship with his or her own parent, it’s downright despicable.

[Now, this is not to say that grandfathers don’t brainwash children. They can and do. But the reality is that in the vast majority of cases, it’s the grandmother who’s highly emotionally vested in the grandchildren, and as such if they feel aggrieved by a child’s ex-wife or ex-husband, many will go to many lengths to harm that person.]

In the process, of course, hurting not just that ex but a child or children as well.

So, how do you combat a grandmother’s actions that are harming your relationship to you son or daughter?

First, start documenting all comments, texts, voice mail messages, and actions. I use Google Docs for all my notes on the evidence of my son’s brainwashing. Then, once you have this evidence hire a lawyer and see about calling a hearing about this abuse. Now, don’t get your hopes up about the judge taking assertive action. Most family law judges are clueless about PAS*. In my case, the judge to this day has done absolutely nothing to warn the mother despite audio and video evidence, and my testimony on the stand. But you still need to make this effort– wouldn’t you like to know your father or mother held a court hearing over the mental brainwashing that was occurring while you were a child? Show some initiative that sadly too many parents lack.

Secondly, place your child into therapy with a child therapist well versed in *Parental Alienation Syndrome (PAS).  This will help your child immensely in the recovery efforts. Having a neutral third party talking to the child about you can do a lot of good.

Third, and I’ll write about this soon as a separate topic, enlist the help of a person who your son or daughter really likes or loves. With some well-timed words talking about you (the targeted parent), and sharing their feelings about you, your child will now have in front of them a huge disconnect: between what they’ve been hearing about you by the brainwashing parent and grandparent for years, and what they’re hearing now from this trusted, liked person.

Last, I highly recommend the book Divorce Poison by Dr. Richard Warshak (order here). He just came out with an updated edition, and it’s terrific. It’s essentially the Bible on Brainwashing.

Don’t just think that brainwashing of children is done by parents. It’s done by grandparents too– and this double-barreled assault on the child and his or her relationship to you can be brutally effective in destroying the child’s opinions, attitudes, and feelings…

John Thomas Steinbeck is a parental alienation consultant. He and his son's relationship was under attack in a deplorable campaign of parental alienation. In this blog, John shares his insights, techniques, and tools in combating emotional child abuse. He did it-- today his son's love has been restored-- and you can too!
View all posts by John →
← Quote of the Week
Quote of the Week →