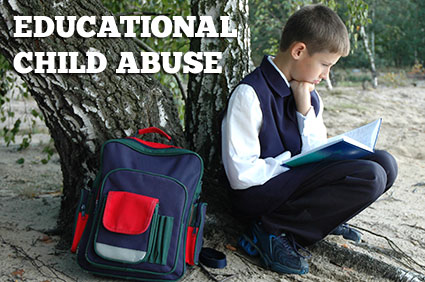 Educational Child Abuse is the harm done to a child by a parent or caretaker who deliberately keeps the child out of school, taking them out repeatedly early, or otherwise preventing a healthy child from being in school consistently.

The motivation is usually a very selfish one of the parent: they’re either too emotionally dependent on the child so they keep them at home, or they are too lazy to ensure that  the child is in school on time every day.

Parents that are capable of educational child abuse are usually abusive in other manners as well. So if a child is being educationally abused, there’s a high likelihood that the child is also being mentally, sexually, medically, or physically abused.

An interesting phenomenon is that of child abuse when the child is being home schooled. There is a serious argument to be made that children are more susceptible to being abused when they are yanked out of school and placed into home schooling. With home schooling, the signs of any form of abuse can very easily be hidden from the public. After all, many of the reports of abuse to authorities are made by schools across America.

Remember Andrea Yates, the mother who drowned her five children in Texas? Not that there’s a defined connection, but her children were home schooled…

Educational child abuse is not yet well documented as a form of “child abuse,” but it’s clearly takes place in too many households and needs to be exposed.

John Thomas Steinbeck is a parental alienation consultant. He and his son's relationship was under attack in a deplorable campaign of parental alienation. In this blog, John shares his insights, techniques, and tools in combating emotional child abuse. He did it-- today his son's love has been restored-- and you can too!
View all posts by John →
← The narcissistic parent
Evidence from afar that your child is being brainwashed against you →