You are here: Home > Munchausen by Proxy 101 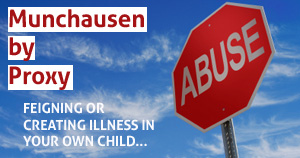 What is Münchausen by Proxy Syndrome?

Münchausen by Proxy (origin of this name) is a severe form of deliberate child abuse, usually by mothers (over 90% are women according to one study), whereby the mother deliberately attempts to get her own child sick via falsified physical, physiological, and/or mental symptoms. This is done through exaggeration of symptoms, actual inducement of symptoms, or an outright lie about symptoms.

Why mothers will do this:

Why it’s such such a deadly syndrome:

The most important task is to protect children immediately from mothers with Munchausen Syndrome by Proxy. And that has to take place through the courts or Child Protective Services (CPS). Unfortunately, their task is made difficult by the difficulty to prove it, and even if it seems provable with lots of evidence, getting judges and child advocates to understand it.

Sadly, in the meantime the child suffers, and often dies.

John Thomas Steinbeck is a parental alienation consultant. He and his son's relationship was under attack in a deplorable campaign of parental alienation. In this blog, John shares his insights, techniques, and tools in combating emotional child abuse. He did it-- today his son's love has been restored-- and you can too!
View all posts by John →
← Quote of the Week
Brainwashing and custodial parents →