Posted on January 28, 2011 by John in Brainwashing 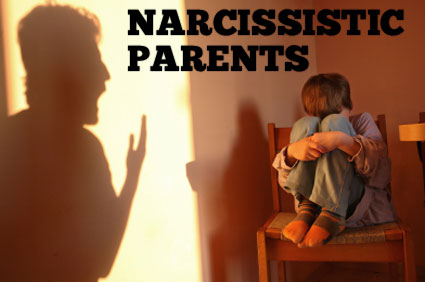 In my study of mental child abuse I’ve noticed how prevalent it is that the child abuser is highly narcissistic.

What’s a narcissistic parent? It’s someone who is self-absorbed, authoritarian (watch out for their outbursts), negative, a know-it-all, never culpable or blameworthy for anything, highly critical of others, secretive, cunning and conniving, manipulative, exploitive, stingy with others (but not themselves), ungrateful, a pathological liar (twists the truth with incredible ease), envious and competitive, deaf to other’s opinions, has zero empathy, doesn’t listen, doesn’t seek agreement (not a single ounce of agreeableness), brags and exaggerates, plays favorites (and it’s a rotating favorite list at that), has no boundaries, never asks you any questions, inept at basic manners, lacks a sense of humor (especially at themselves), and excels at making others feel guilty… He or she is one unhappy person who can successfully convince their targets that they are needed, and that without them their targets would be nothing.

Looking at these traits, how many of them apply to your parent or ex? A narcissist will have most of the traits listed.

There’s a simple reason why the more a parent brainwashes his or her own children (or dishes out any other form of abuse), the more narcissistic tendencies they have:

It takes an extremely selfish and sick parent to inflict such harm onto their own child.

Any mature parent can set aside anger or hurt from a divorce and keep their child on neutral ground by refusing to enroll them in the middle of the conflict. But a narcissistic parent will be hell-bent on minimizing or even outright destroying the child’s relationship with the ex and unable to place their child out of the emotional turmoil. They can’t do it. In fact, they will actively bring pain to their own kids. That’s how mentally ill they are.

So how do you counter these parents, and is there hope for changing them? A sobering quote:

“Trying to reform narcissists by reasoning with them or by appealing to their better nature is about as effective as spitting in the ocean.”

That has been one of my biggest frustrations with my ex, thinking that reasoning with her and letting her eventually calm down and see for herself that I’m a good Dad would temper her behavior towards our son. But it never happened, and her actions even got worse over time. The sad reality is that you can’t change the narcissist. They don’t have the self-awareness or humility to see that they’re out of control and need help. They’re incapable of introspection. It’s deeply unfortunate, especially if your ex is the custodial parent and has ample amounts of time to transfer these narcissistic  traits onto your child.

The only recourse for you is to be a normal parent, providing needed contrast for your child. It’s very important to insist that any behaviors in him or her that mimic your narcissistic ex are stomped out immediately. So if your child is flippant, rude, and lacking manners– and they will on many levels when they’ve been living with a narcissist– don’t tolerate it.

Since a narcissistic parent is governed by his or her feelings, they don’t have the ability to own up to their obligations to shield their child from emotional heartache, adult issues, stories of how bad Mommy or Daddy is, etc. They will actively get the children involved in the conflict.

These parents are a vortex of negative energy, and will suck the life out of those around them. Children of narcissists suffer, and they come in two camps: those that are aware of this parent’s bizarre, completely irrational behavior “Yeah, there my Mom/Dad goes again…”, or they’re not and are mentally and physically smothered by the parent. Sadly, lots of these children end up inheriting the narcissist’s traits, supporting the findings that many children of narcissistic parents become narcissists themselves.

The reality is this. Once the children become adults, the only way for them to not further suffer under the tyranny of a severely narcissistic parent is to move away from them. Creating physical separation, and thus limiting contact, from a parent might seem like a bad solution. But the alternative is living a life of suffering. Remember, the narcissist will never change. After all, he or she isn’t the wrongdoer or person with flaws. Everyone else is.

“The narcissist has no conscience and no feelings for others, especially their own children. The only thing that matters is their own selfish ego– coercing, manipulating, causing chaos, and damaging lives everywhere they go.”

Have a question for me about narcissistic parents? I’ll answer on future podcasts and posts. Thanks! – John