Turning all phones off during the child’s birthdays, for Thanksgiving, Father’s Day, etc.

You are here: Home > Turning all phones off during the child’s birthdays, for Thanksgiving, Father’s Day, etc. 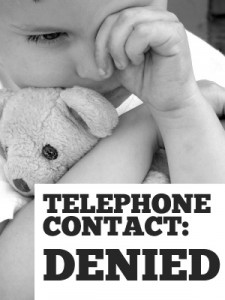 It’s been a rare holiday or birthday that I’ve been able to speak to my son. And never has my son initiated a call to me for these important dates– even Father’s Day.

Of course we know that kids aren’t generally aware of these dates and to reach out to loved ones, which is why they usually need a parent’s guidance. In a divorce, that means the parent with the child should help the child reach out to the other parent on these special days. However, a parent bent on minimizing or destroying the importance of their ex will place barricades up to keep the child from connecting to the other parent. It’s simply sick.

Recently on a big holiday, my son’s mother conveniently produced cell phone technical issues and the ridiculous “phone was being charged” argument. Nevermind that almost every phone can be used while it’s being charged.

This difficulty and sometimes outright inability for you to get through to your cute loved one(s) is a telltale sign of that parent’s hostility towards the child having a solid relationship with you. These parents brainwash their children on top of the gag on their child’s communications, and end up harming the child considerably.

One way to take the bull by the horns on this is to ask, preferably via text (so that it’s documented), a few days earlier when’s a good time to call on that day. If it becomes a recurring theme, then it’s time to contact your lawyer and consider a strongly worded letter for starters, up to a full blown hearing. Don’t let this parent get away with such awful behavior!

Think about what this teaches the child:

1. Important occasions don’t warrant even minimal telephone contact with the other parent

2. Ignoring the other parent on Father’s/Mother’s Day, a birthday, or Christmas is completely OK

3. Ignoring your siblings, uncles, and other relatives is also completely OK

It’s sad that parents routinely pull this ploy on their kid’s relationship to the other parent. It’s despicable.

Posted on December 21, 2010 by John in Brainwashing, Exposing the methods

John Thomas Steinbeck is a parental alienation consultant. He and his son's relationship was under attack in a deplorable campaign of parental alienation. In this blog, John shares his insights, techniques, and tools in combating emotional child abuse. He did it-- today his son's love has been restored-- and you can too!
View all posts by John →
← Medical child abuse (Münchausen Syndrome by Proxy)
The narcissistic parent →